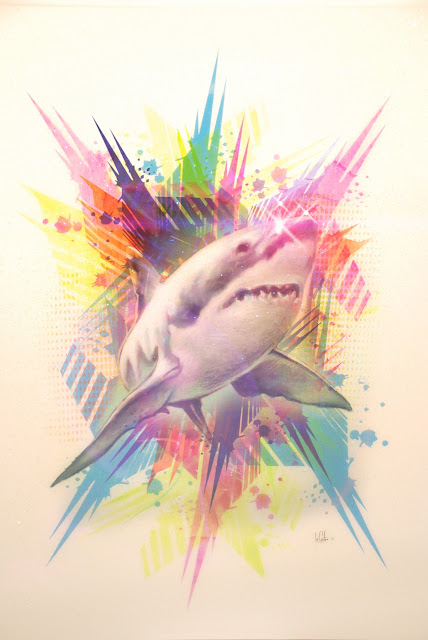 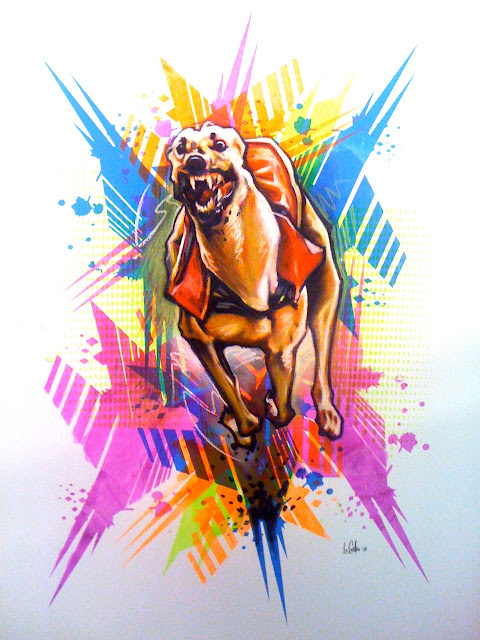 When i first opened your myspace profile i couldn' t avoid to notice that you were from "Miami, L.A., Roma, Berlin, Florida, US" all at the same time! Actually where are you from? Your name and surname sound a bit familiar...

I was born in Catania, Sicily. My family is from Militello in Val di Catania (also the birth place of Pippo Baudo). When I was one year old we moved to Germany, where I lived and studied until I was 16 in the vicinity of Stuttgart. In 1993, I moved to South Florida, USA where I have been living ever since. 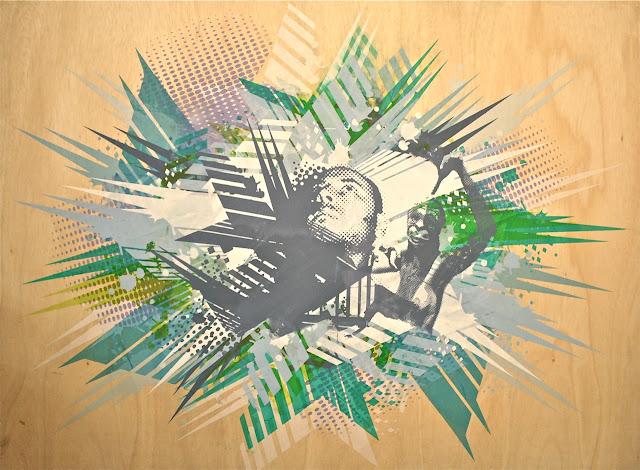 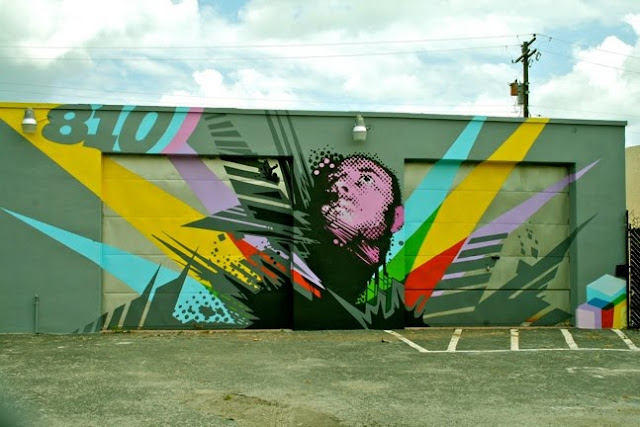 I guess you have moved a lot. Where are you working at the moment?

I live and work in South Florida. Miami has been the city that has challenged and helped me to further my art career.
It is a unique place, even within the USA, and I have seen its art scene grow from the ground up and over the years have had my share of influence over its flourishing into one of the contemporary art capitals of the world.
I also have very strong ties to artists and galleries in Los Angeles, San Francisco and New York. Thanks in part to them, I have been fortunate enough to exhibit my work all over the U.S. and beyond. 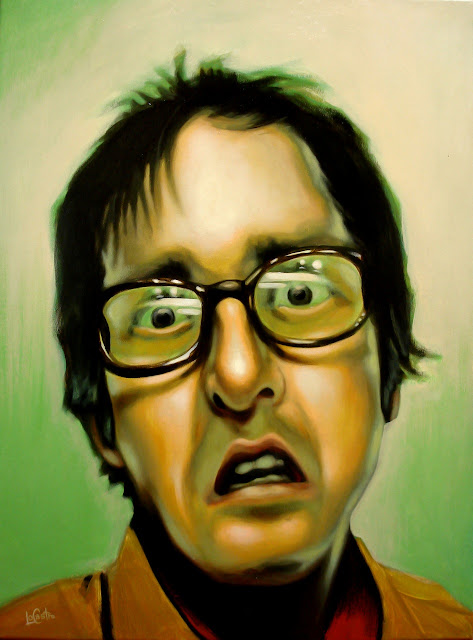 "Give It Back" Portrait of Rocky Grimes, Acrylic on canvas, 18" x 24" 2006
Your art is very impressive, especially your portraits, so true. Lights made the difference. How do you capture all these emotions and put them all together?

The transference of emotion is always at the core of my work. A well executed portrait, devoid of physical expression, in other words without the ability to instill that feeling or emotion in the viewer, is completely pointless to me. Surely, that is the goal of every artist, though few contemporaries seem to succeed at it. Maybe it is because, lately, the emphasis on technical ability and execution has outweighed the conveying of emotions. Ultimately, the "hey, look at how good I can paint!"- attitude apparent in many emerging artists' works never fulfills the simple, pure truth conveyed when the creative focus is mainly on the emotional bond with the viewer.
The ultimate goal of the artwork should always be to successfully evoke an emotion no matter how tight or crudely painted the image. In my case, I never let my technical ability take the spotlight away from the story I am trying to tell. That is the starting point and basis of my work, to achieve it is to strive for perfection and it is a goal I try to not lose sight of. 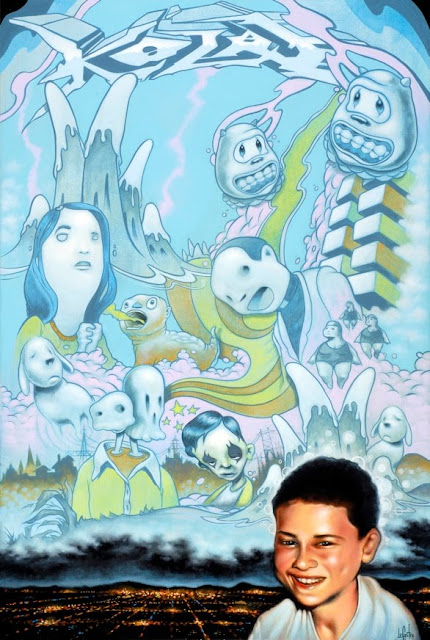 "I Never Saw Thing Your Way". Is this just a title of your painting or is it the truth?

It is a self portrait that was commissioned for the Scion Installation Tour in 2009. I chose to use a photograph of myself when I was about 7 years old. Looking at the photograph I was immediately brought back to that time and had a distinct memory of being alien to my surroundings, my family and friends. I've always been an outsider and have over the years accepted that fact. But as a young boy, having moved around a lot, I really didn't know how to digest the notion of alienation and displacement. I felt confused, disappointed and saddened for not being able to fit in, but not mindless enough to want to change my self to adjust to my environment. That is probably why I retreated into a fantasy world, more suitable to my outlook on life. Looking back and seeing what I have become, I now understand...there was no other way for me to feel or behave. Being different was my calling. Being different was nothing to be afraid of and well worth the exploration. 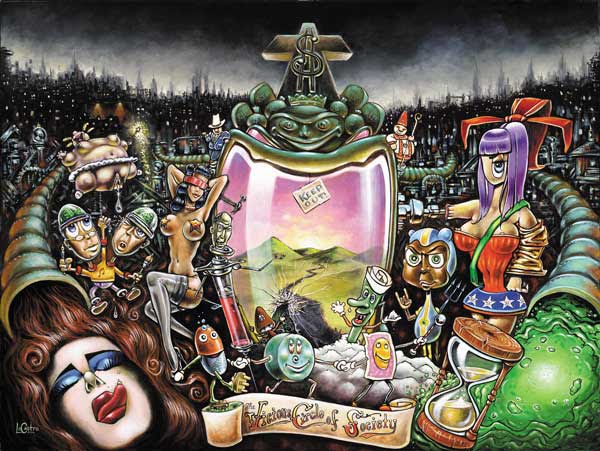 "The Vicious Circle of Society" represents a censure to the contemporary society. What do you think is the worst feature about it?

Having made this painting almost 10 years ago, I would have had a different answer for you then. My understanding & opinion of society is much more complex these days, but I will try and keep my answer brief:

The worst feature of society today is that the Greek definition of democracy has been gutted, disassembled and re-packaged as a ghost of past democracies that, in reality, acts as a veil for capitalist fascism,
where the agenda of propagated freedom no longer equates with our idea of human freedom....and there is no one we can blame but ourselves.
Society is a a man-made structure designed to keep the human animal in check through philosophical reasoning, morals, ethics and above all laws. When this structure is stripped away, all that remains is the vicious, primal beast that is the human animal, set on a survival of the fittest.
As a whole, society progresses somewhere between wartime annihilation and the ever elusive, seemingly unattainable idea of World Peace. Communally, we are a species in need of restraint, that if given our freedom in the real sense of the word would not hesitate to run amok. Democracy is widely regarded as the cure to our flawed existence and character. At the same time, we seem to have this innate need to be governed, letting go of our democratic ideals to free ourselves from responsibility and, in turn, let those drunk with power take the reigns over our decision-making.

Clearly, we are moving towards a singular global community and the day will come when we will reach a humanistic general consent which will open the door for every being on Earth to live under the same rule and share the same privileges, ushering in a time that could be considered World Peace. However, it could become a time of great dissonance as well if that general consent will not be achieved by the informed individual and therefore the population as a whole but rather be imposed by an elitist upper echelon of society. A future world that may harbor little resemblance with a democratic state.
General consent (world peace) could become so restrictive that it would make true democracy impossible and therefore human existence hell on Earth.

"The Vicious Circle of Society" reflects a picture of the human character which progresses while being guided and reinforced through a series of controlled acts of encouragement, reward as well as restraint & punishment.
So far that is the only way we as a species have been able to evolve. Basically, we are walking a very fine line between salvation and extinction. Only the people have the power to tip the scale to their advantage...only the people have the power to ruin everything. 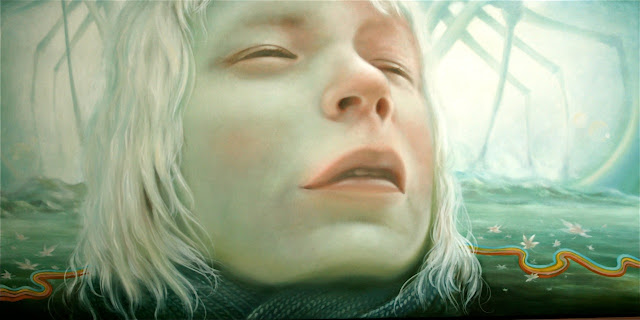 I wanted to capture a feeling of inner silence and innocence...a moment of quietness that would not last for long.
In the distant background you can see a spider/crab like shape appear.
For the moment, all is well; but no one knows whether the creature represents the force protecting the innocent from imminent danger or if it represents the looming threat in itself.
Therein lies the mystery of the image; and that uncertainty remains forever captured in the painting.
The only glimmer of hope is apparent in the title, which hints that everything is going to be alright...
If you want further clues to the puzzle, I suggest you watch the Swedish film "Let The Right One In." 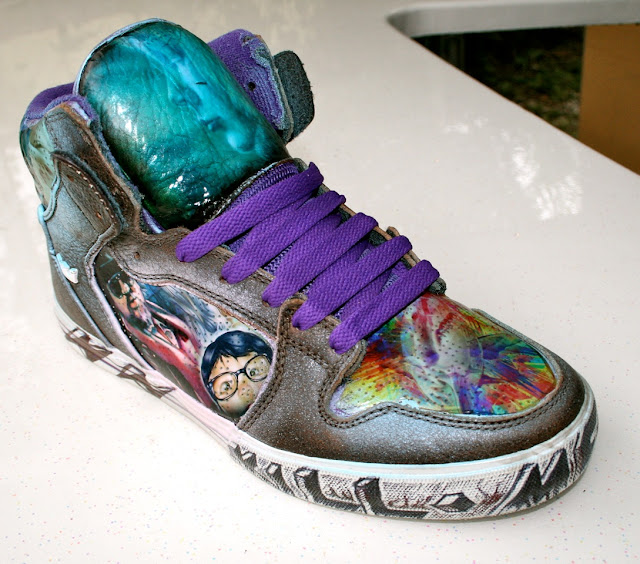 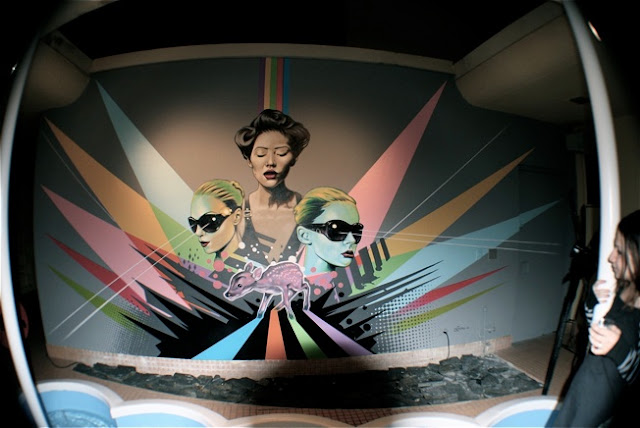 What about plans for the next future? Any collaboration? I think i' ve seen in your gallery on myspace a picture of your last show. Did you collaborate with Christian Colin?

My immediate goal is to complete a new body of work, depicting a new contemporary visual language that is innate to the cultural renaissance that has been growing in Miami, culminating with a solo exhibition at Butter Gallery, Miami in November, 2010. The exhibition is titled "Eternal Summer: The Miami Years" and will feature portraits of the many unique personalities that have forged the Miami art & music scene in the past decade.
I also plan on expanding my presence in Europe in 2010/11, already collaborating with artists, curators, publishers and galleries in Italy, Germany and the UK.
I am collaborating with German artist collective Hot Cheese Crew for this year's STROKE 02 Urban Art Fair in Munich, Germany in May (http://www.hotcheesecrew.com/).
My tribute painting of the Godfather (Marlon Brando) is going to be featured in the Italian teen magazines BLOGmag & BE-U (http://www.blogmag.it & www.be-u.it/).
Sintomi di Gioia, a band from Bologna used my "Where Clouds Come From" painting for their new "Segnalibro"album cover (http://www.sintomidigioia.it/) and the groundbreaking Italian publishing house DRAGO is including an article about my curatorial efforts in a book on curators who have been pivotal in promoting the new worldwide contemporary art movement (http://www.dragolab.com/).
Colin Christian, a sculptor and his wife Sas, a painter have been part of my curatorial projects ever since I first began. Though, I do not foresee us collaborating on any artwork in the near future...you can never tell what will happen down the line. 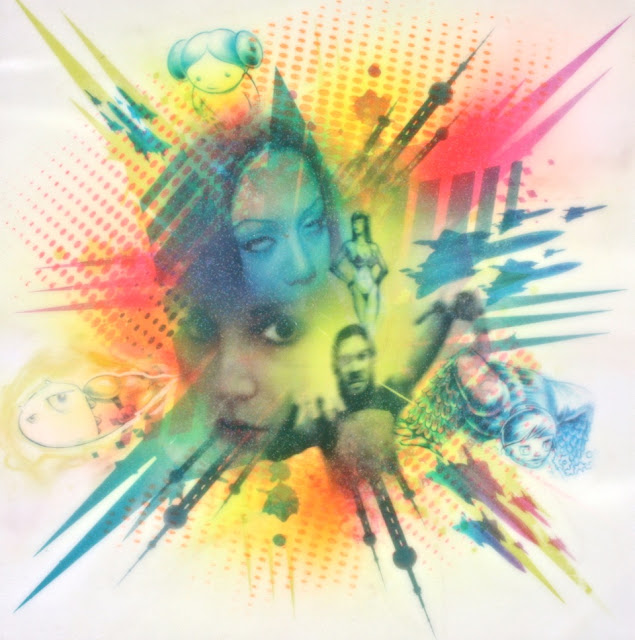 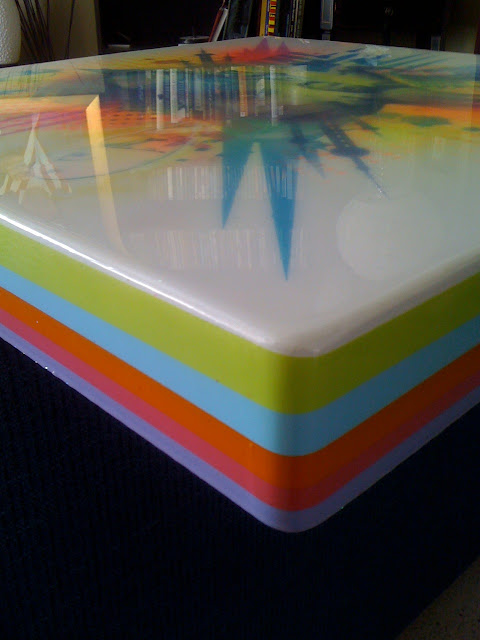 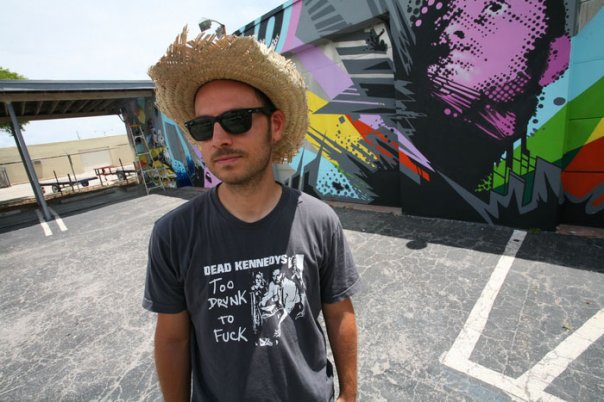 Have you ever exhibited in Italy?

Yes, I exhibited at and curated the FURORE Exhibition at Dorothy Circus Gallery, Rome in March, 2008. Other artists included were: Ron English, Dalek, Colin Christian, Sas Christian, Kris Lewis, Zoe Lacchei, Rocky Grimes & LEBO.
The show was very successful and the folks at DCG have been great partners and friends ever since. They even produced a wonderful soundtrack for the exhibition, composed by renowned musician Giorgio Baldi. It was a great honor. 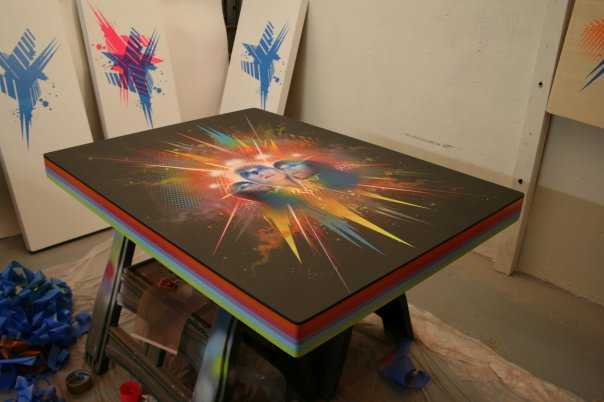 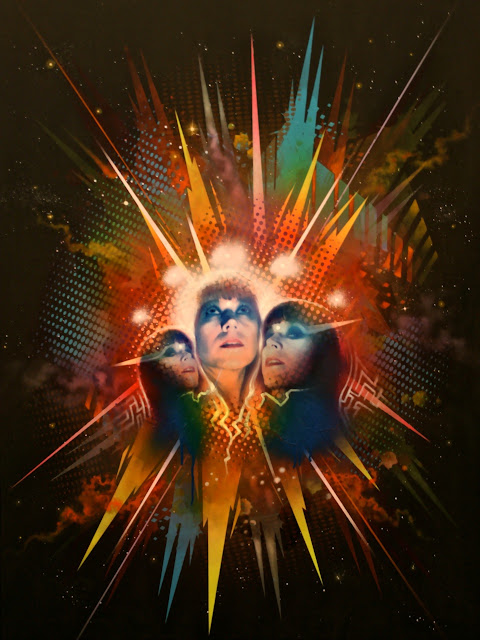 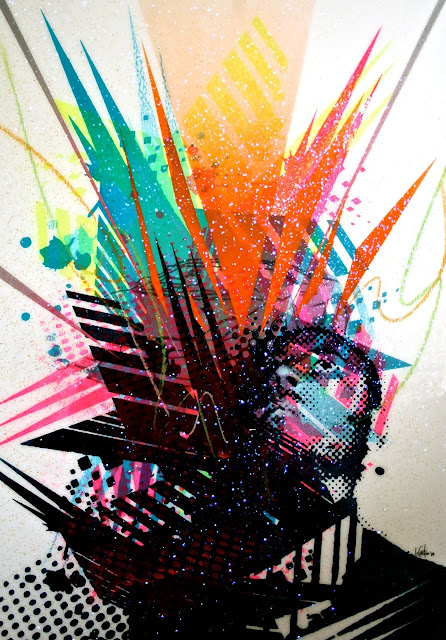 "Knowing How The World Works Is Not Knowing How To Work The World" Mixed media on wood, 18" x 24"
Posted by Daniela Petkovic at 16:47