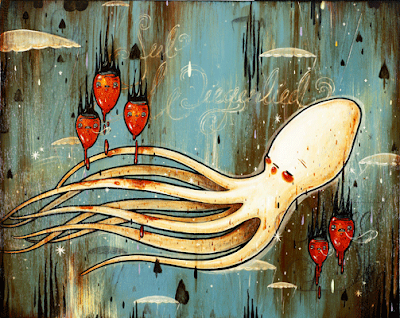 Hi Brandi, let’s talk about your background. Did you go to school to become an artist?


No, i didn't go to school to become an artist. I didn't go to college really, I just took some art classes here and there at the local community college. I kinda studied art on my own, I would collect things that inspired me, and draw from them whatever I could. 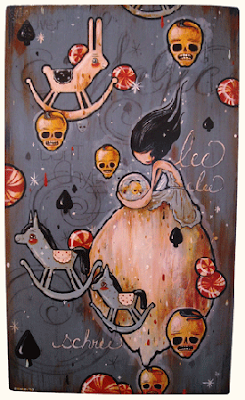 What technique you use the most to paint?


I use a lot of glazes, lots of thin layers with acrylic and water. Its so messy and hard to control, so I love the challenge that it brings. 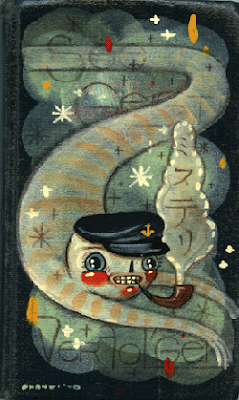 What kind of surface is your favorite to work on?


I really love working on wood right now. I love that I can use as much water and paint as I want and not worry about warping the surface in any way. I used to work on illustration board a lot, and it was always a concern for me. It's nice to be free of that working on wood. 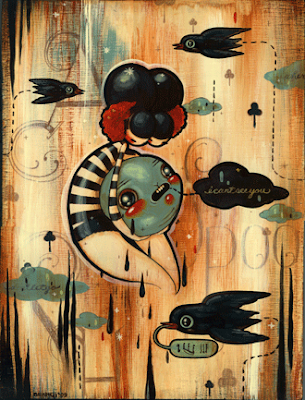 What language do your characters talk?


I use a lot of Japanese and German along with English in my paintings. I don't speak anything other than English so using words from a different language is like putting little secrets into my work. 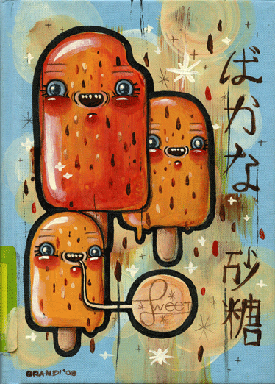 Why have you chosen this language instead of another more understandable?


Sometimes I don't want to be too obvious in my work, that's why I use the different languages. It gives the piece a new kind of mystery, an unanswered question. In that way, it makes the letters or symbols - art. 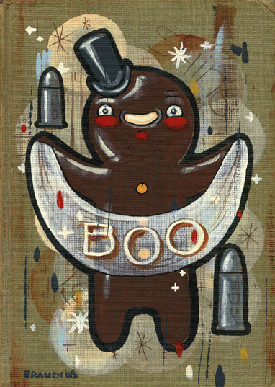 Do those characters come out with their stories from your own private experiences? If so, How?


Most of the time, yes. If a character is speaking, directly, it's something I want to convey. It's a feeling, an emotion or a word that speaks of what I'm feeling for the piece, or just in my private life at the time. 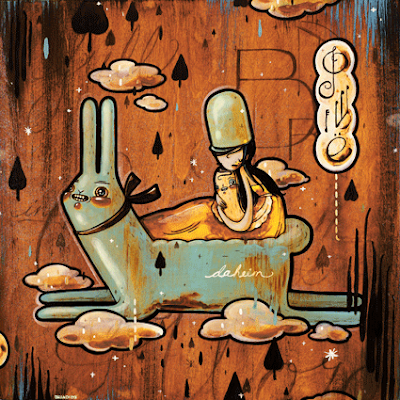 What about your first book, So Good For Little Bunnies, published in summer 2008 with Baby Tattoo Books?


It's a sweet story that was loosely based on my own experiences at the time I was writing/illustrating it. I had just gotten married, left home for the first time, and was feeling very home sick. At the same time, I was having the best time being on my own and being independent. So in the book, the main character Be Be (bunny) goes off to the Carnivale for the first time, and meets a lot of odd characters on the way! It's a children's book for adults, and I'm very proud of it, and thankful for the chance to create it.

What are you working on right now?


working on a series of books I'm calling "Ugly Folk Tales", which will be a sort of departure from the "normal" Brandi Milne world. They're a personal work, that I'm really excited to complete. And another series of paintings I haven't named yet, a larger series of circus lady heads, which is also a personal work. I've recently been working with Planet Illogica, Hurley, Letterpressed and a few other companies creating some exciting goodies for the near future too, so keep an eye out!


It' s gonna be the biggest and best show to date!! I'm working on theming it out, rolling with the punches and going for the gold! The show will take place at the Corey Helford Gallery in Culver City and I'm looking forward to knocking socks off. 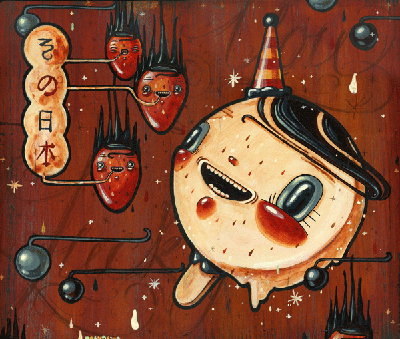 Have you ever been to Italy? Is there any gallery in which you would like to exhibit?


I've never been to Italy - it's a dream of mine to go. I would love to show with Mondo Bizarro Gallery someday.

Posted by Daniela Petkovic at 19:11