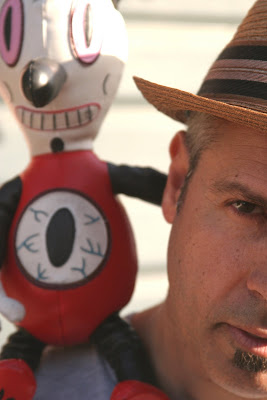 Art did not enter my life. This description would be so subtle. Art exploded into my whole existence as a child. Even as a boy, I was living and breathing art. I was a precocious child, when it came to art but I was very immature in every other aspect of my life. Growing up in Hollywood, Pop Culture was everywhere. And I loved it.

But when it came to going to the university, I never studied art formally. I wanted a liberal arts education. I somehow thought, one can not learn art or, at least, your own personal voice, in school.
After college, I went through a great deal of insecurity and fear of failing as an artist. It took a few years of being truly miserable trying to compromise with thoughts of going to Law School or working in Adverstising before I made the decision to put myself out there to be an professional artist and show my portfolio and risk rejection.
So in my mid-twenties is when i made the true decision to live my life as an artist.
If you had to define your art, what kind of words would you use to do that?

Desire. Longing. Lust. Bittersweet. Absurd. True. Everywhere. Everywhere. Pervasive. The english term, Pervasive, means that something is perceived everywhere. And I used that term to describe my art movement.
As long as an artist is true to there unique voice and has a strong message, I believe an artist can put his or her mark on any medium, very gallery walls, toys, fashion, tv, film, internet, skateboards, lamps, condoms, etc, etc, etc.
But the theme of my art usually has to do with the bittersweetness of life. The good and bad mixed together. Love and Death. Ecstasy and Loss. The human condition. But I do it in a very playful way. Very sweet and dirty. Very iconic.
My voice may have a very pop culture background, my imagery I try to keep them very poetic.
If i'm right, you were born as illustrator and cartoonist but you have worked as commercial and editorial artist and as a television and film art directorand producer of animation also. A very prolific artist so that the next question easily comes: Who is Gary Baseman? What' s his real passion? What does make his heart beating fast?
What is my real passion? What makes my heart beat fast? Girls. Girls. Girls. I love women. i love intimacy. I love the closeness. I love everything about it. The touch. The kiss. The anticipation. I love to look at women. Their eyes, their curves. I love the ability of being truly giving and truly selfish. I love to dream about it. To draw it. To create worlds about it. I created ChouChou who takes all the girls negative energy and hate, and he absorbs it and oozes it out of his belly button as creamy gooey love. I created Hotchachacha who deflowers angels by stealing their halos.

In your paintings always appears the feminine gender, mostly looking like little girls, and strange puppets that somehow give a touch of anxiety to the picture. What' s the meaning of them? Among the characters that you have created, which one is your favorite one? And why?
Yes, I seem to love to draw girls. Women. Young women sometimes. and their "imaginary friends. " I love these little creatures, they usually represent man. And usually represent a side of "me."
My real favorite right now is ChouChou. I just recently created a vinyl sculpture of him in Japan. He is so cute.
They are very limited but I want to create a non-limited version of him.
But the one creature who means so much to me is Toby. Toby is the keeper of your dirty little secrets. I created him at a time when I needed a best friend, a mirror, someone who is my shadow.
I have been taking him around the world photographing him in surreal ways.
What's the message of your art? What do you think about when you are painting? Which is the role that color has in your work?
Each exhibition has a theme, and I explore them through my paintings and sculptures. Overall, I try to understand an aspect about the beauty of the bittersweetness of life.
It could be in the Happy Idiot exhibition where the Snowman sacrifices himself by melting himself down to let his love the mermaid live within his body of water. Or the "I am Your Piñata" show, where I try to explore allowing oneself to open themselves up to the world and not be afraid of rejection by being hit by the big stick of life.
What is your source of inspiration? Which are the artists that influence you the most?
Well, my sources of inspiration is pretty much what my real passion is or what defines my art. Desire. Longing. Girls. I find my inspiration all over. Of course, in art. But I also find inspiration in all aspects of life. Some of my favorites are, Man Ray, Walt Disney, Andy Warhol, Charles Addams, Dr. Suess, Leonard Cohen, the Velvet Underground, the Beatles, the Marx Brothers, Jeff Koons, Yoshitomo Nara, David Bowie, Philip Guston, Charlies Bukowski, Marcel Dzama, KAWS, and of course, many of my contemporaries in the LA art scene like Mark Ryden, Marion Peck, Rob and Christian Clayton, Camille Rose Garcia, Richard Colman, and Seonna Hong, to name a few. 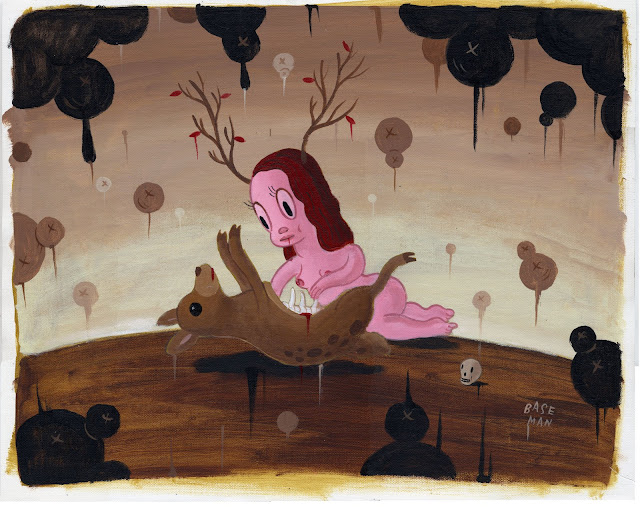 When i contacted you, you told me you were coming back from an amazing trip in Russia where you had an exhibition and five speaking engagements. What does this experience have left to you?
I did have the time of my life in Russia. My parents met in Russia at the end of the Second World War. I am the first in my family to go back since the war. If my parents made a different decision and stayed in Eastern Europe, I could have been from there and not from Hollywood. I thought the people were wonderful. and the girls so beautiful. I danced every night in wonderful causal clubs till 5:30am every morning.Everyone seems so interested in the art. They can see it on the internet but this is the first time they can see it in person. They still can't come out to America. They need visas but maybe i can bring the art to them and may be help change things for artists to come in and out of Russia.
Some of your works are part of the permanent collections of the National Portrait Gallery in Washington D.C. and the Museum of Modern Art in Rome. When have you been the last time in Rome and what did you love mostly of that beautiful city?
The last time I was in Rome, I did a live painting at the Castel Saint Angelo. it was a beautiful night and I painted outside barefoot. I had a wonderful time and I was very proud of the painting I completed.
but afterwards I ran myself down and became really ill. it was so frustrating cause I love Rome and Italian food and lost two days to get well. I do want to tell the story of when I had my first solo exhibition in Rome at Mondo Bizarro, I brought my first prototype of Toby to Rome. And snuck a photo of him in the Sistine Chapel, since I wanted to introduce Toby to Michelango. I got one nice photo taken that day.
and That very night, the pope died.
it was freaky.
What can you suggest to who is going to start a career like yours?
Everyone should start their own career. Find their own way. The best advice would be to look deep inside themselves and understand what they want to say as an artist and start expressing themselves.
Also they need to take responsiiblity for not just the creation of art, but also who sees the art and how it is seen. Also remember, if you are going to create a new visual language, then you are responsible to teaching others that language.


What are your projects for the future?
My long term goal is to create a true art company with a staff of artists and designers, blurring the lines between fine art and commerce, producing products, publishing, sculpture, fashion and entertainment.More short term goals is a small solo exhibition in Israel in January, a big celebration and exhibition in LA in April, with my new book "Creamy Gooey Love" coming out, and a big NY exhibition in October.
And I hope to visit Italy and get into as much good trouble as possible. 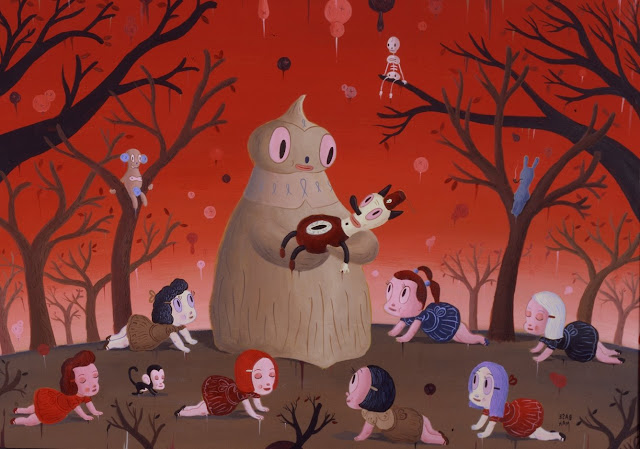 Posted by Daniela Petkovic at 16:52

very interesting interview, i like Gary Baseman and how express its emotions...good work keep in touch...;-)

Just to let you know that I find your interview very successfully implemented.
A work well done.

I am looking forward to your proposed interview of me soon.
Hope to hear from you later.
Thanks.
Timothy Orikri